Our Little Bacon. <3
I don’t know, it must be just mother’s instinct or probably it was just my brain commanding of what I should think and feel. But the moment I knew I was pregnant, I knew it was gonna be a girl.  I just felt it and knew.
In the first few weeks of my pregnancy, a lot of people would reaffirm what I was feeling. They kept telling me that our baby’s a girl – they say because I was blooming and did not look pregnant at all. Yey. Haha.
We initially gave our baby a nickname – Baconette, well short for little bacon. Because, who does not love bacons right??? Haha. So that’s why I called our baby, Baconette. Okay. Okay.
Baconette was really active in my tummy, her measurements were all good, and she’s always been well inside.
When we confirmed that we were indeed having a girl, I told Beej I want to name her MONICA. Few months into our dating stage, I dreamt of giving birth to a baby girl and named her Monica. Ever since then, I would always look forward to have my own baby girl. Beej agreed right away. You might ask why? I don’t know as well. It’s possible that I got Monica from watching FRIENDS over and over. Hehe.
For the other name, I wanted a name that starts with D, why? WALA LANG, gusto ko D. Okay lang? Haha. So I have (Yes I decided haha) come up with Dareen. Again, gusto ko lang. Ayos lang? Some of the people I know just laughed about the name Monica, I was hurt actually then realized, kebs nyo ba? I know in my heart that Monica is perfect name for our baby.  HUGOT pala. HAHAHA.
<3 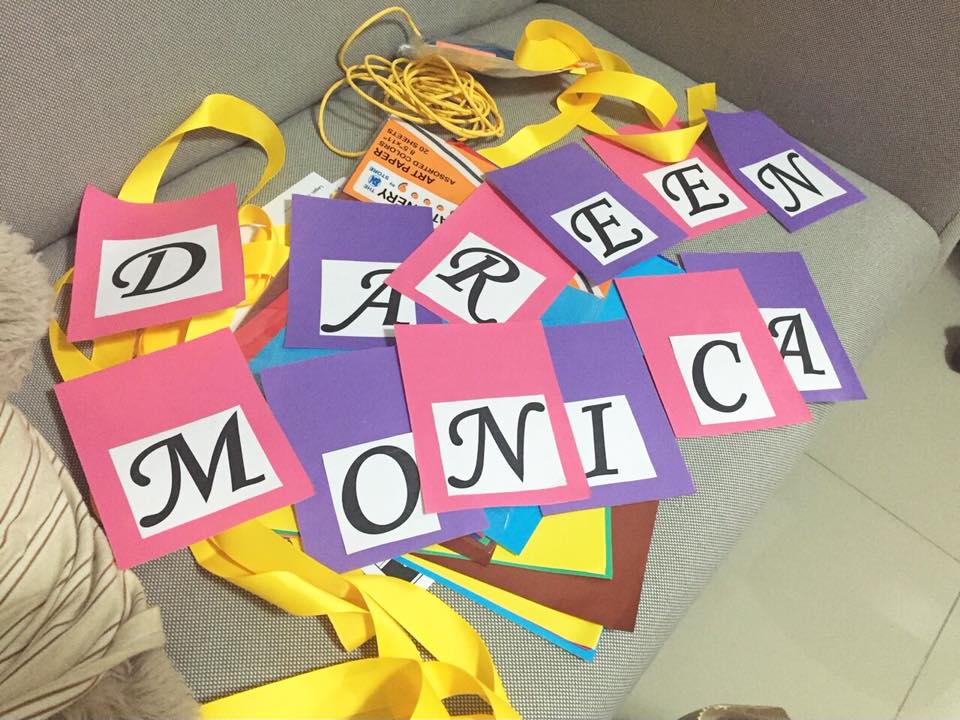 I was conscious with my weight gain, with how I do my exercise, with how I looked, and with what I eat. Blame it to the hormones and the pregnancy stuff I’ve been reading. I stayed active. I would swim or walk everyday, I would control the portions of my food – except for really, really “hungy days”. I gained just about right. And just like that, I entered the last trimester.

Our little bacon grew much bigger, more active, and healthier. We had a 3D/4D scan on the 7th month and found out she looked so much like her daddy. She did not even want to show her whole face but we can tell, she would be a daddy look-a-like.

At this point in my pregnancy, I have enjoyed chats with my co-pregnant friends, my mommy friends, and those friends who want to be preggy too. I must say I learned a lot from them more than the stuff I’ve been reading online. It actually helped a lot that I stayed connected with the right support group.

The last few weeks of my pregnancy paved way for my nesting stage. I re-arranged our unit, prepared it to be baby-friendly and made sure everything is ready. We shopped for baby stuff and welcomed those pre-loved ones given by family and friends.

My mom organized a last minute baby shower for us and I was really overjoyed! It was simple but a very memorable one!
And, the waiting game begins…. 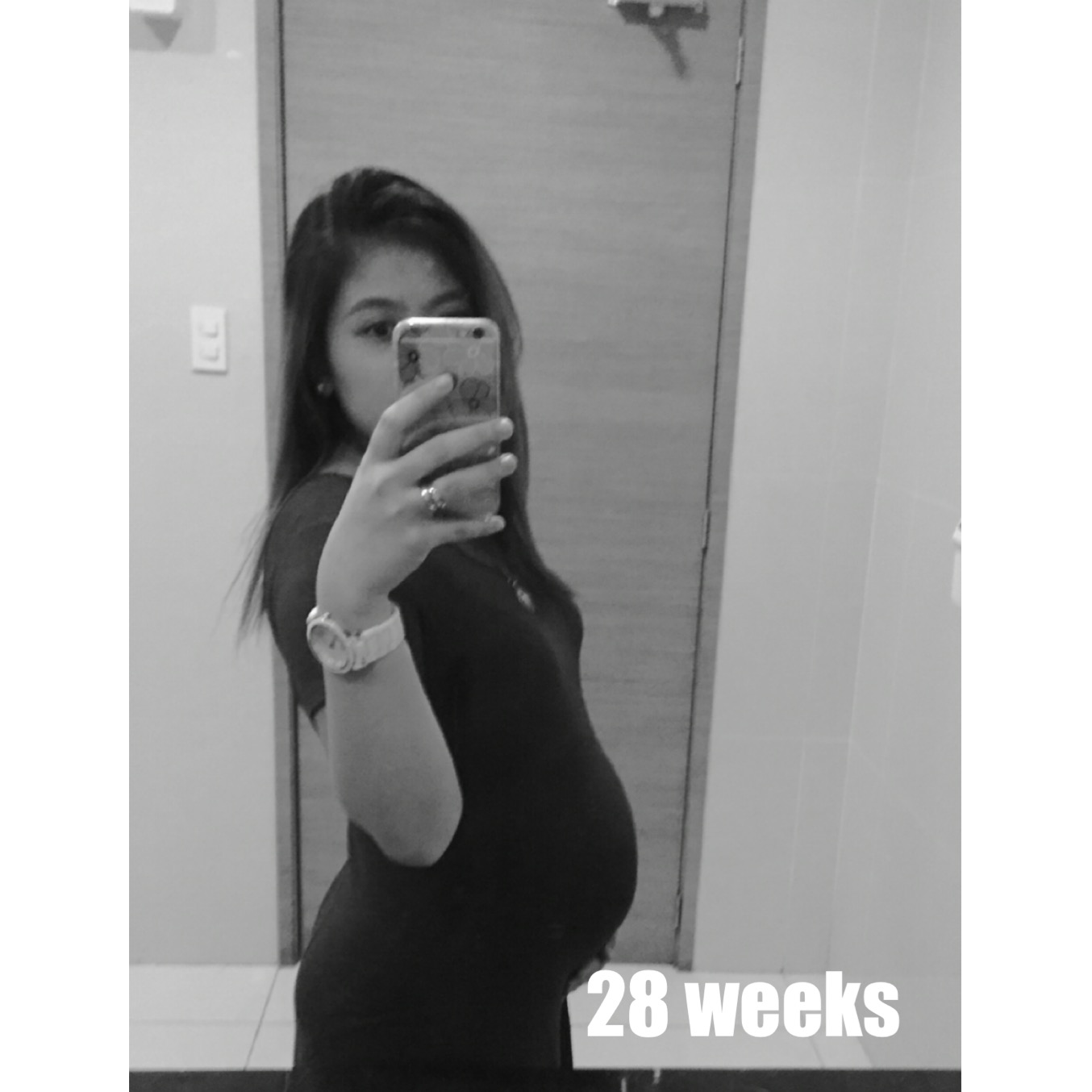 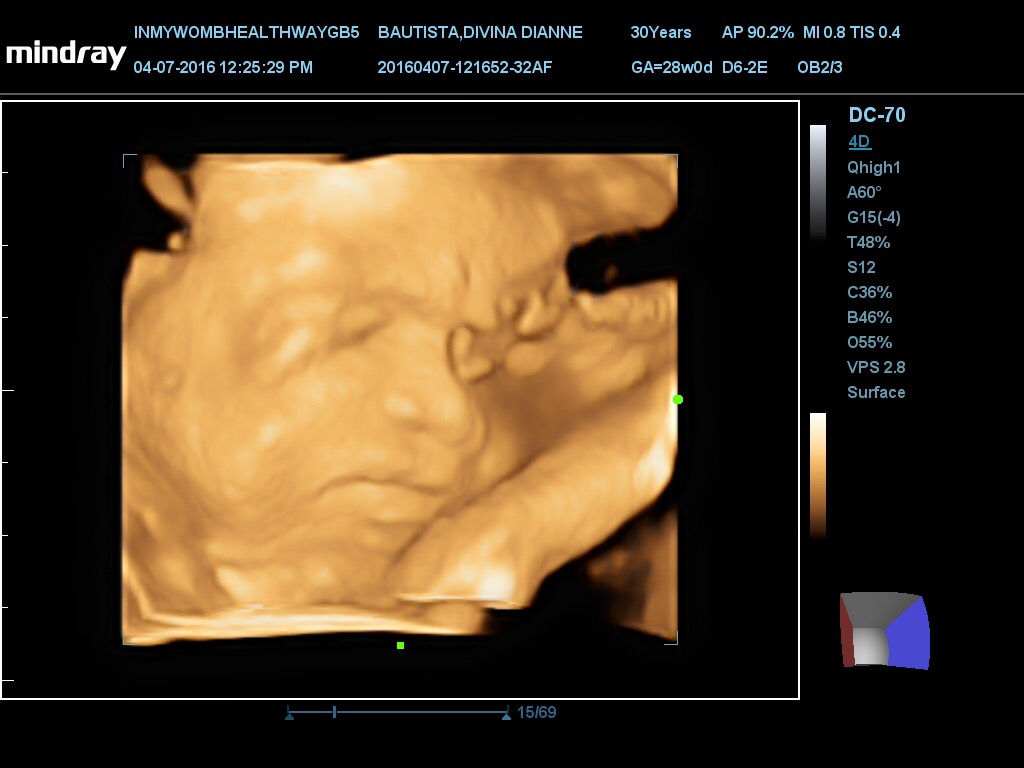 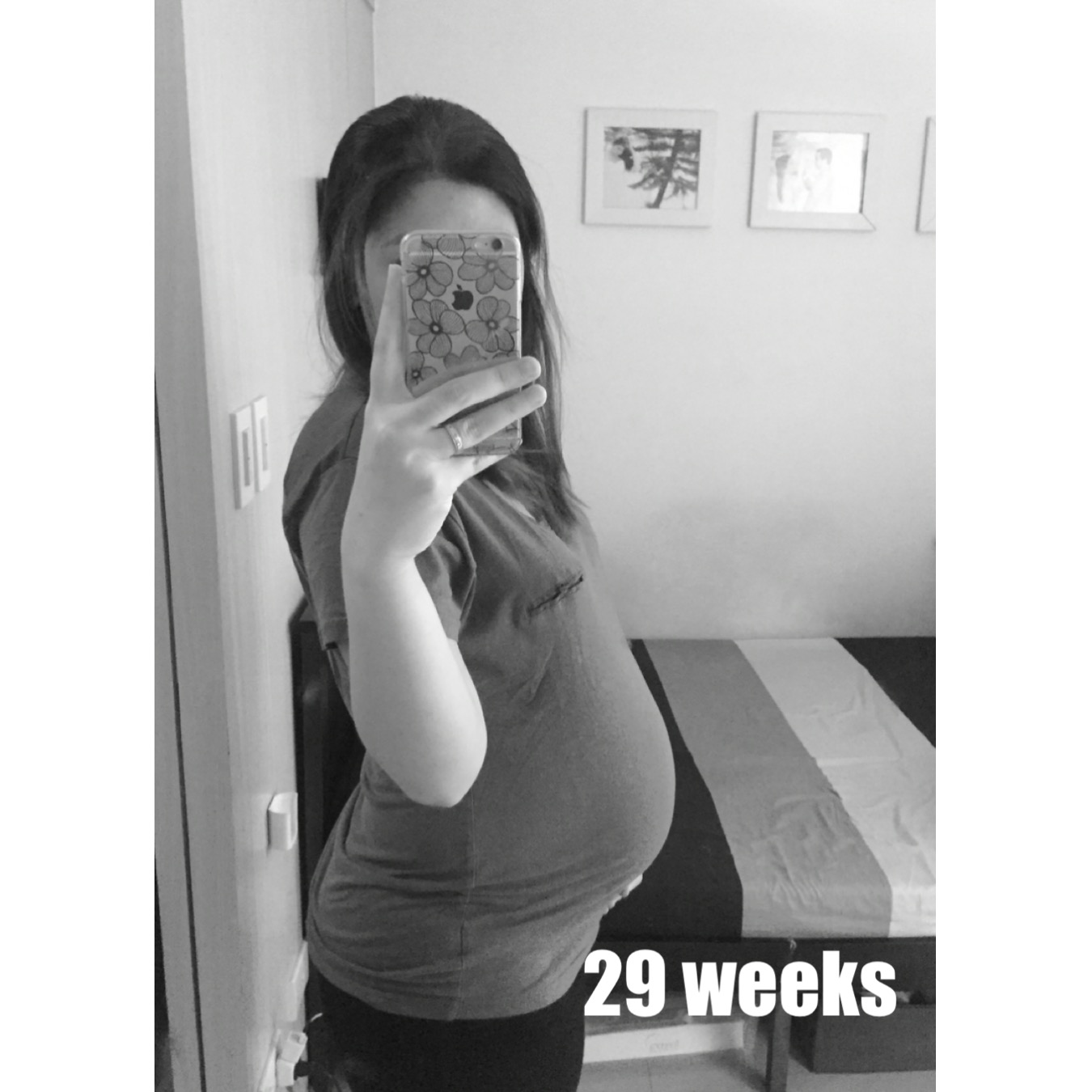 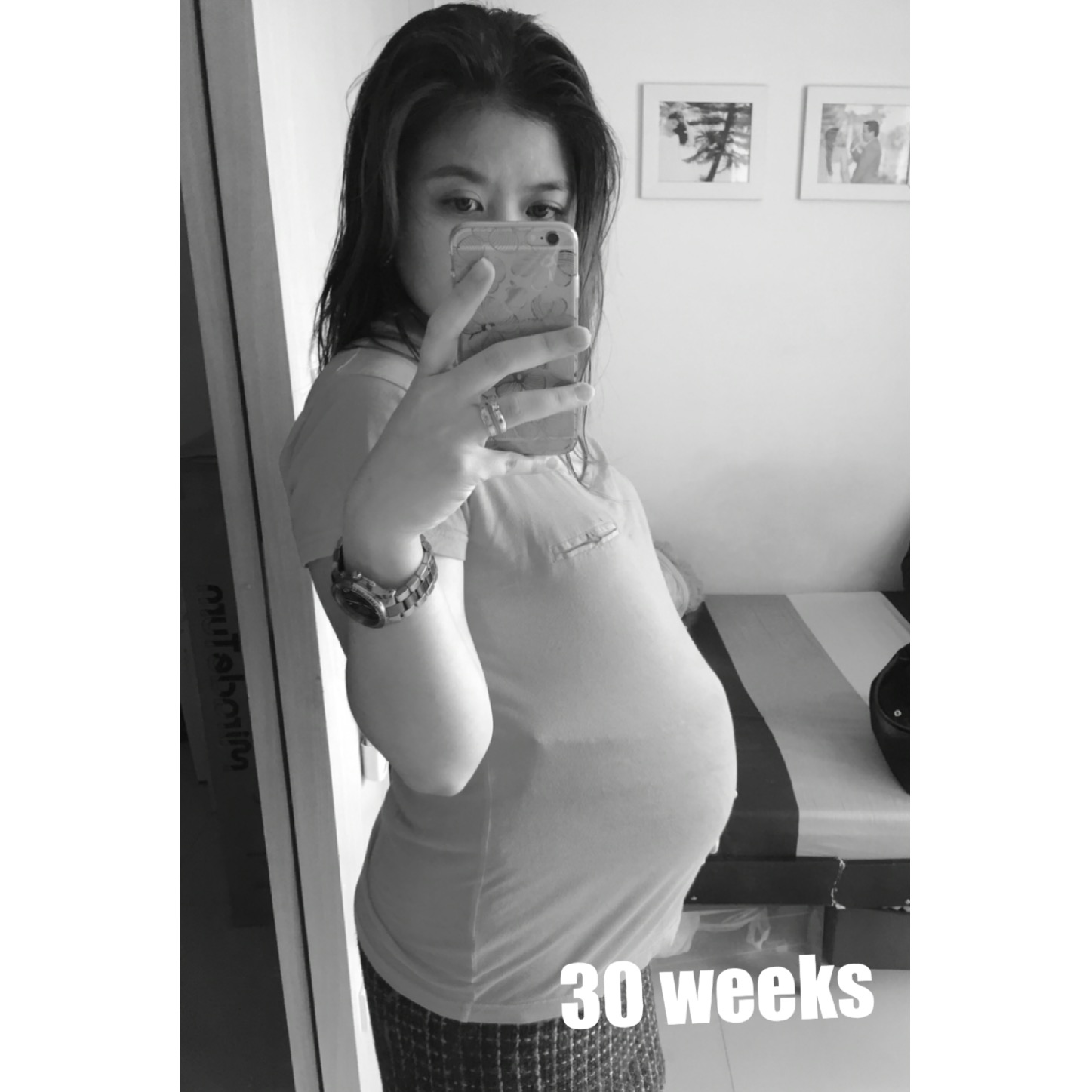 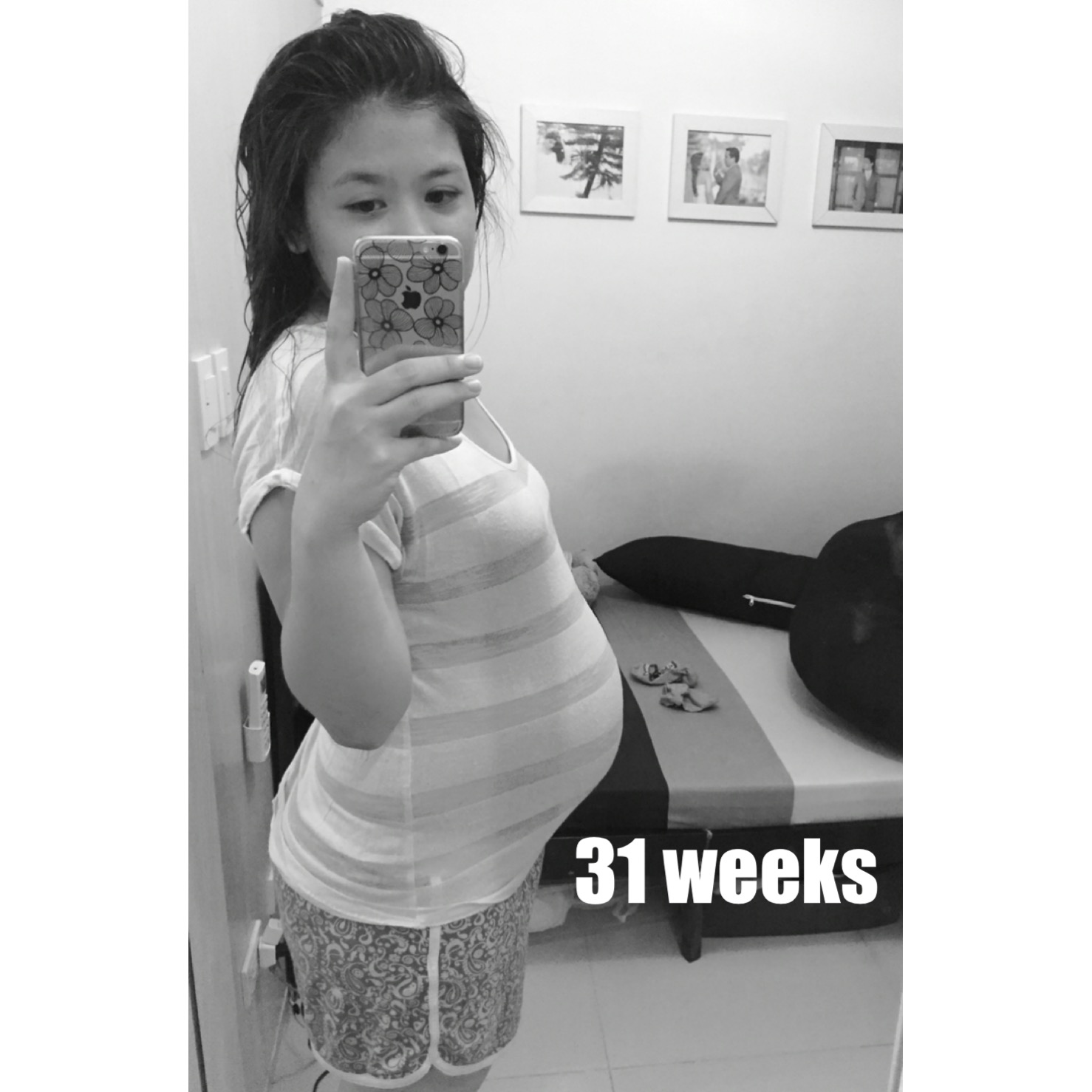 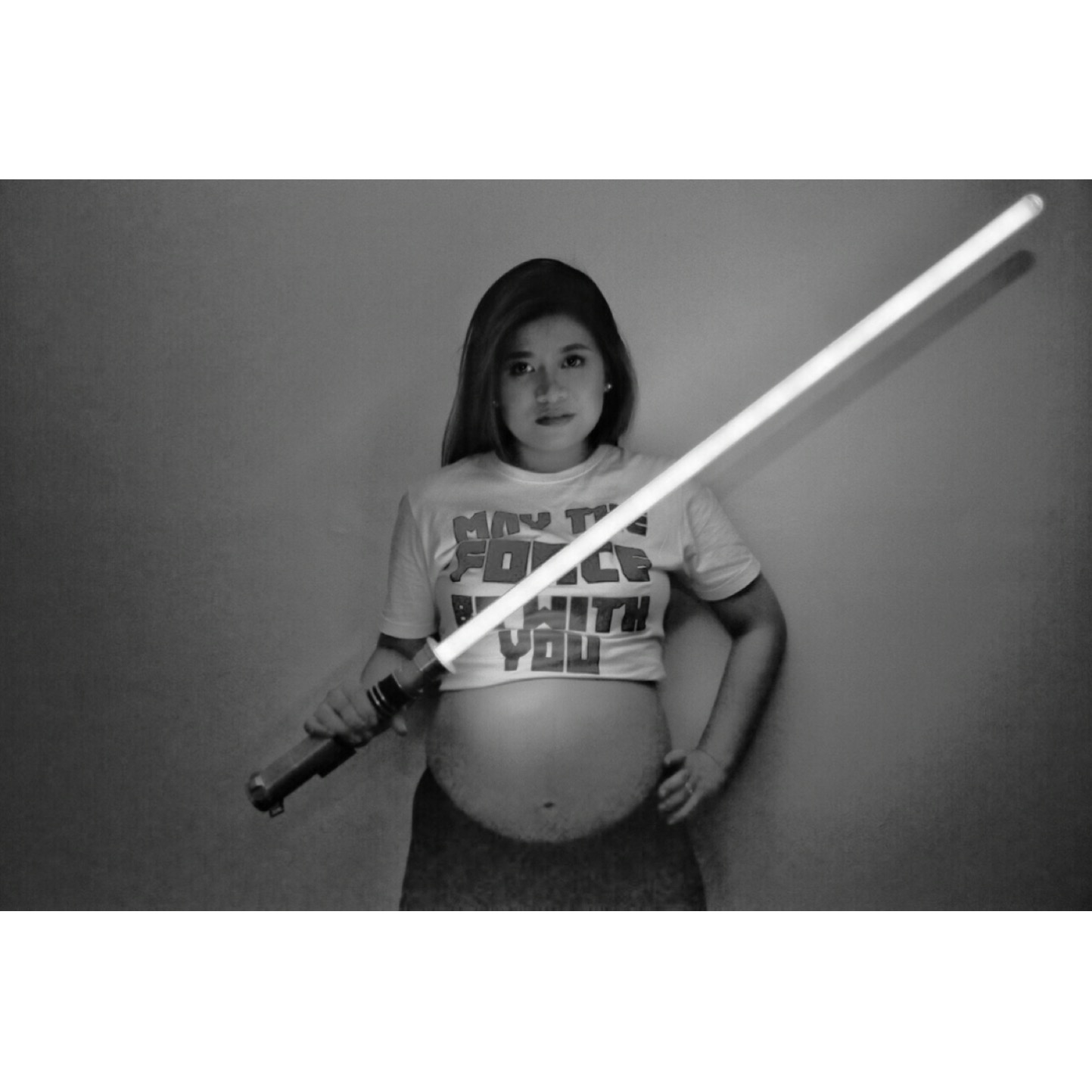 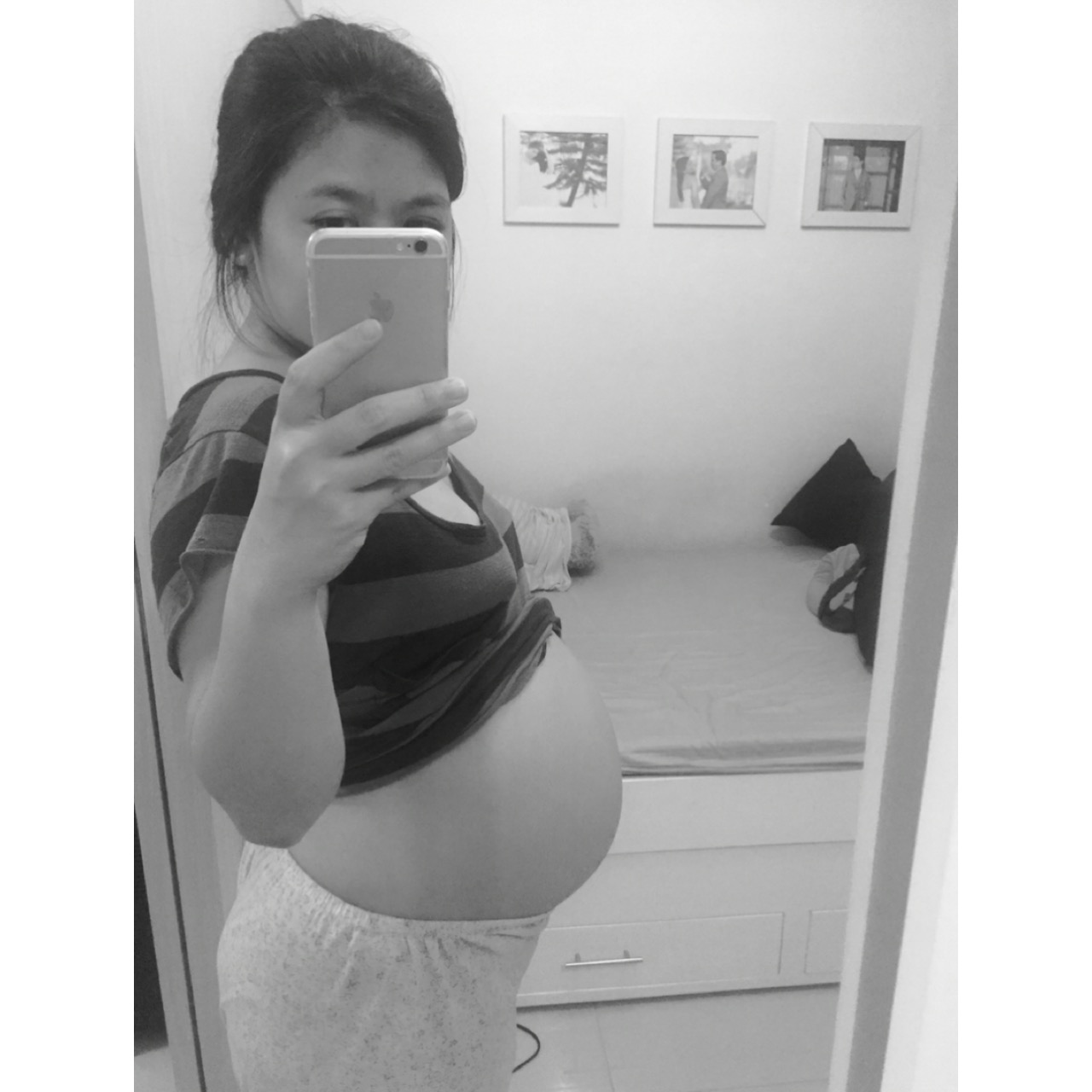 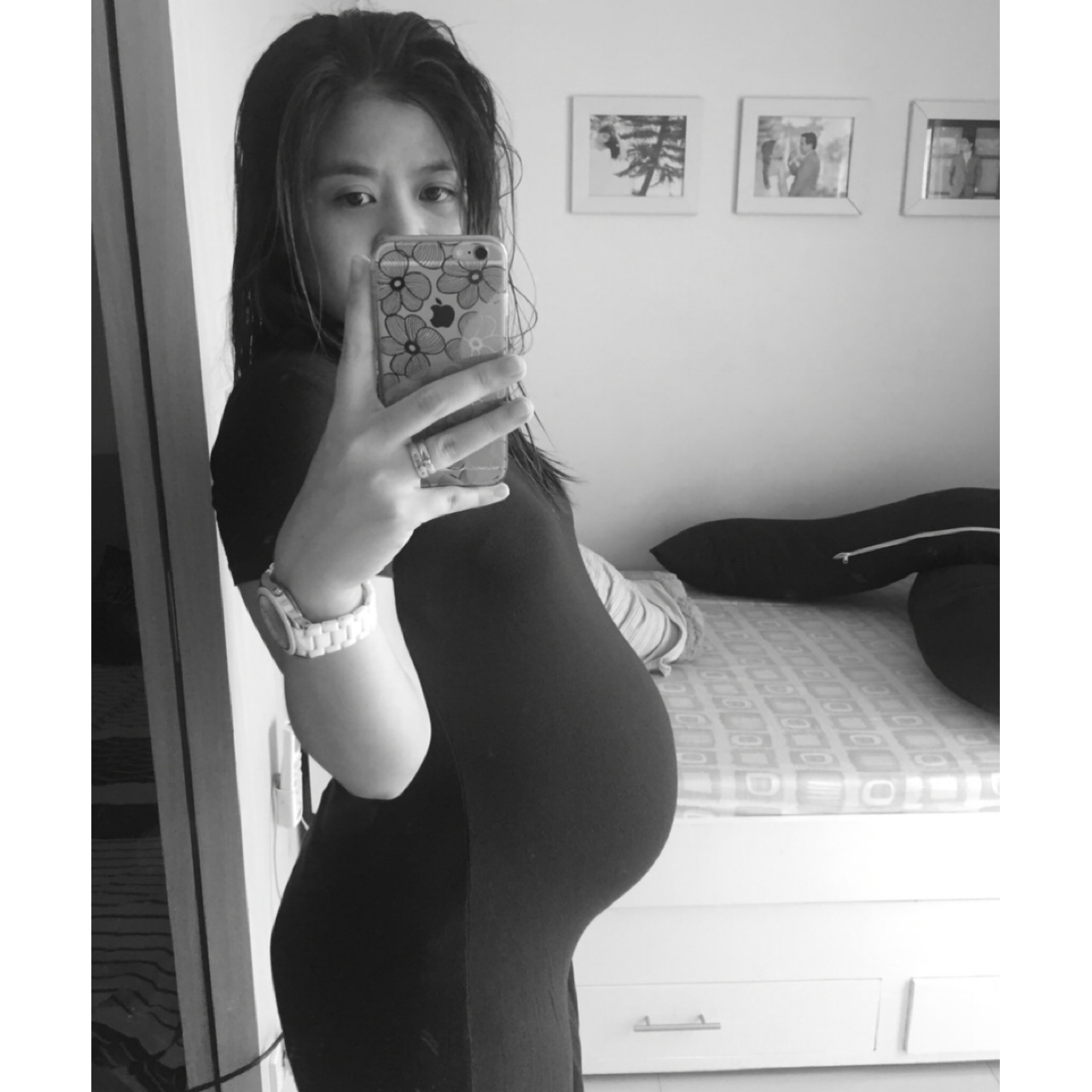 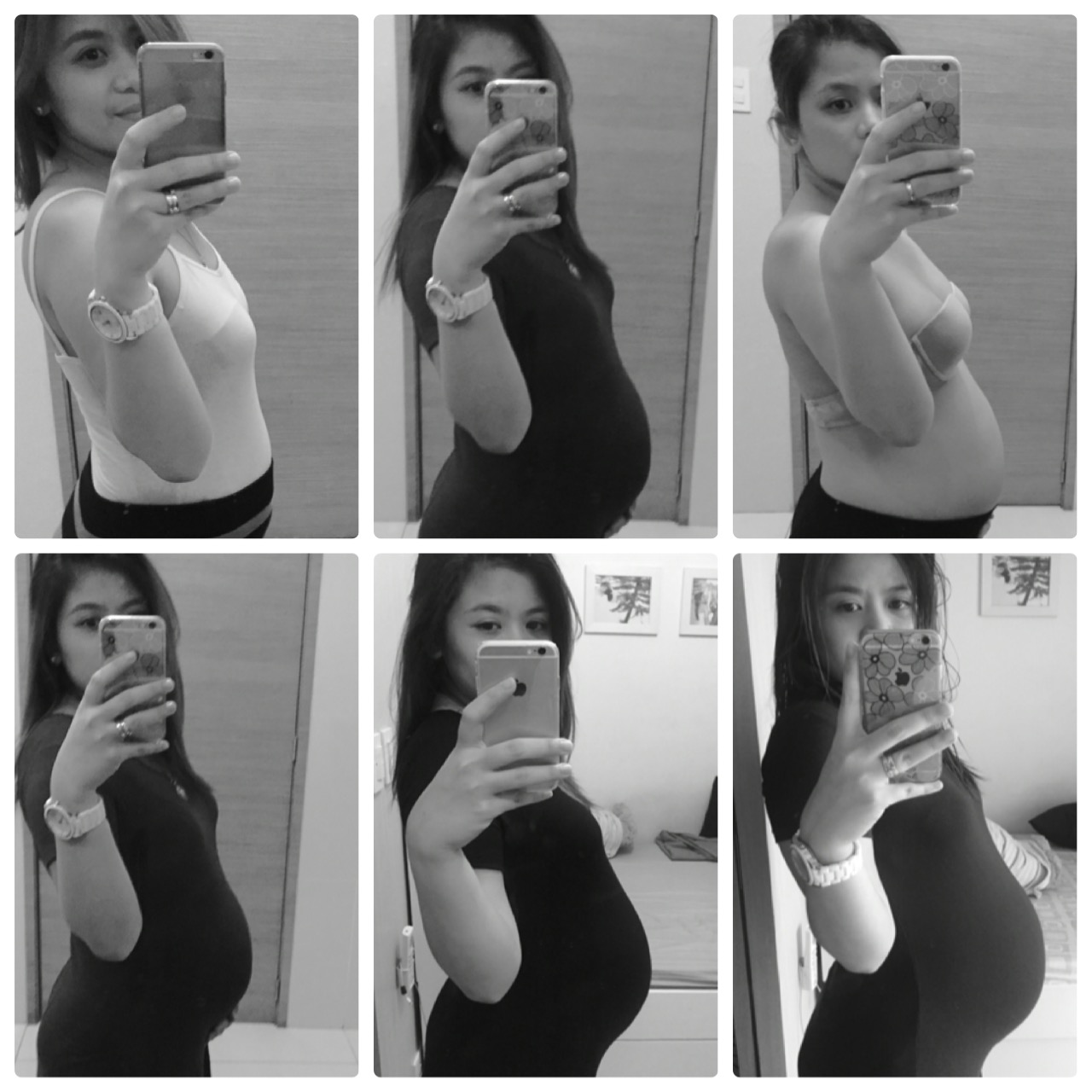 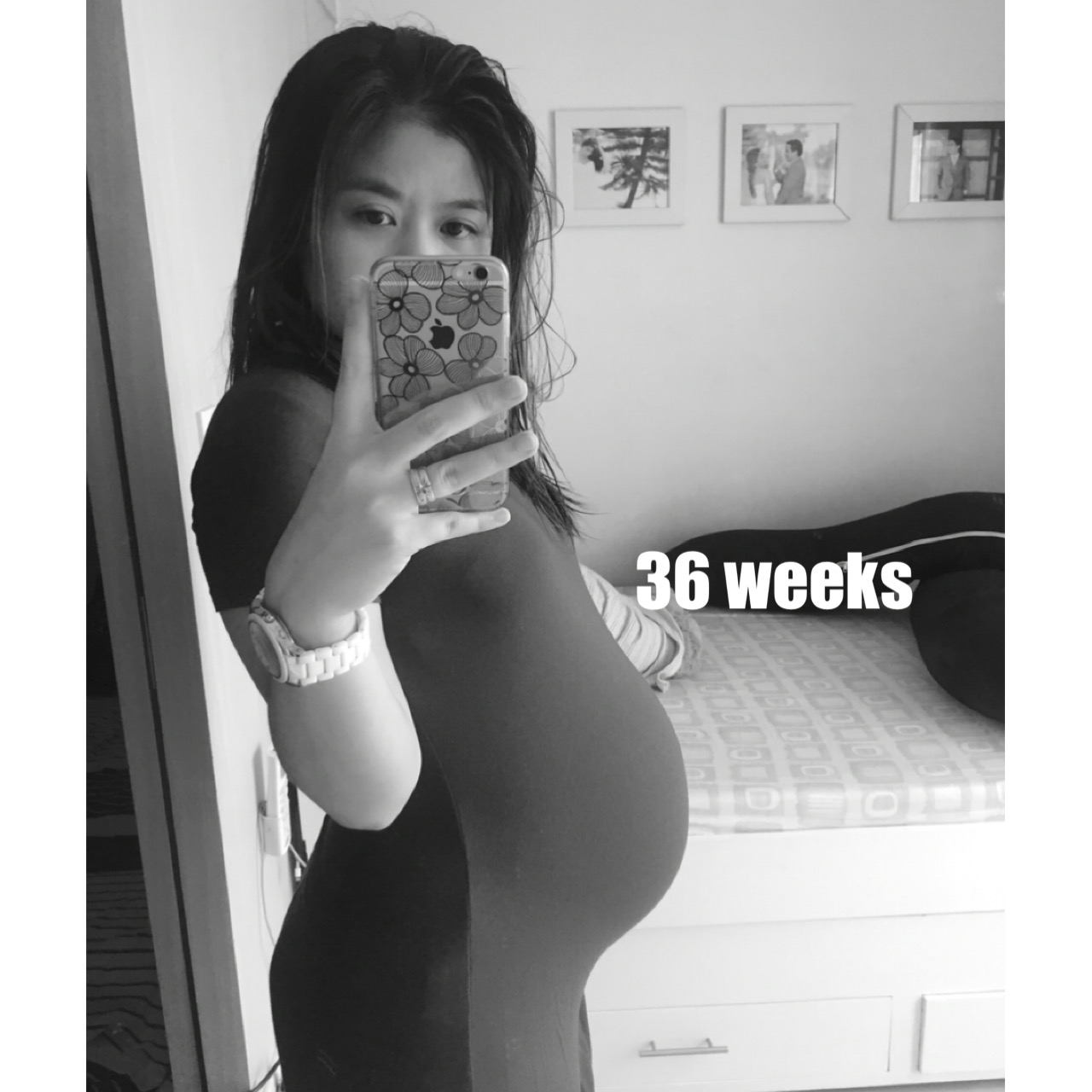 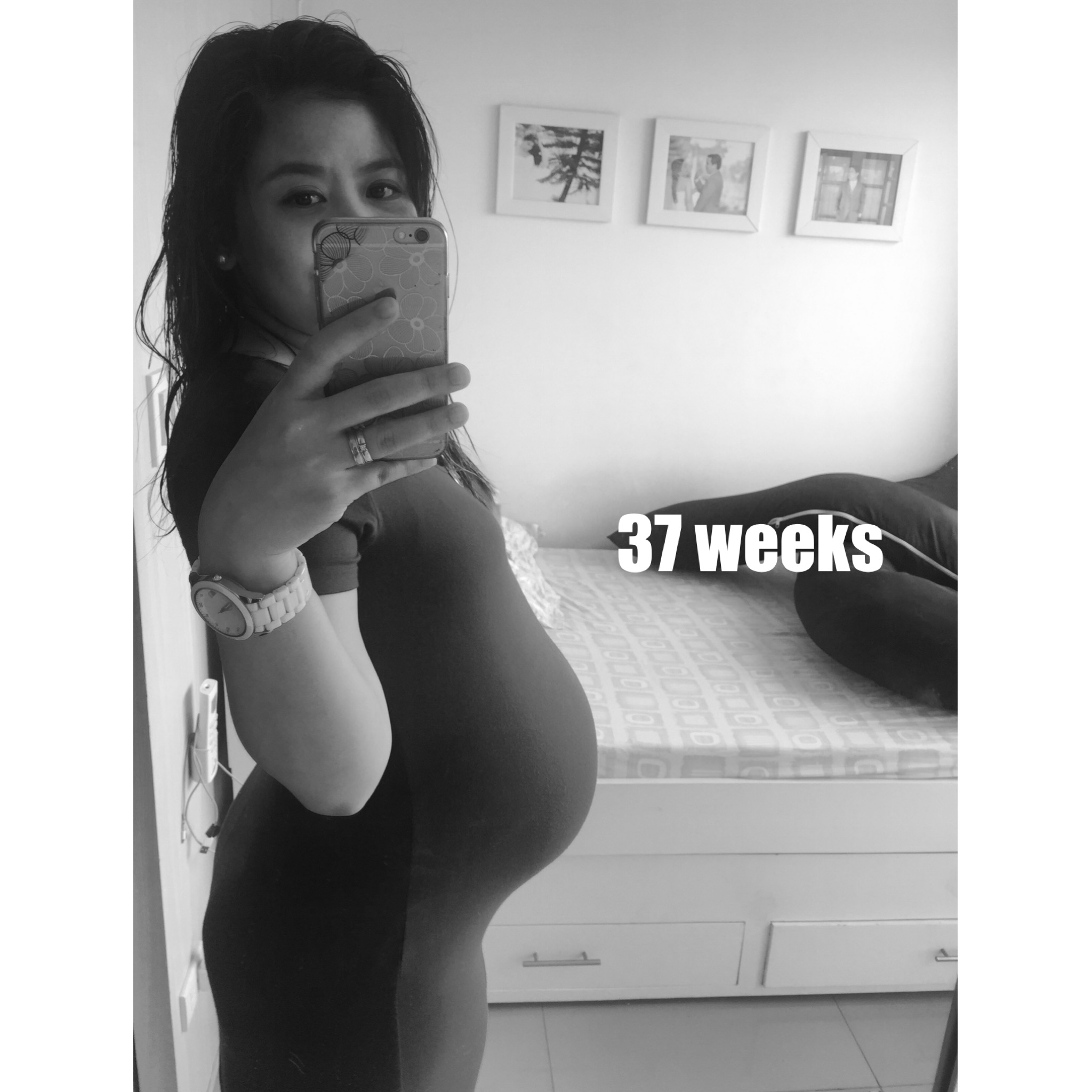 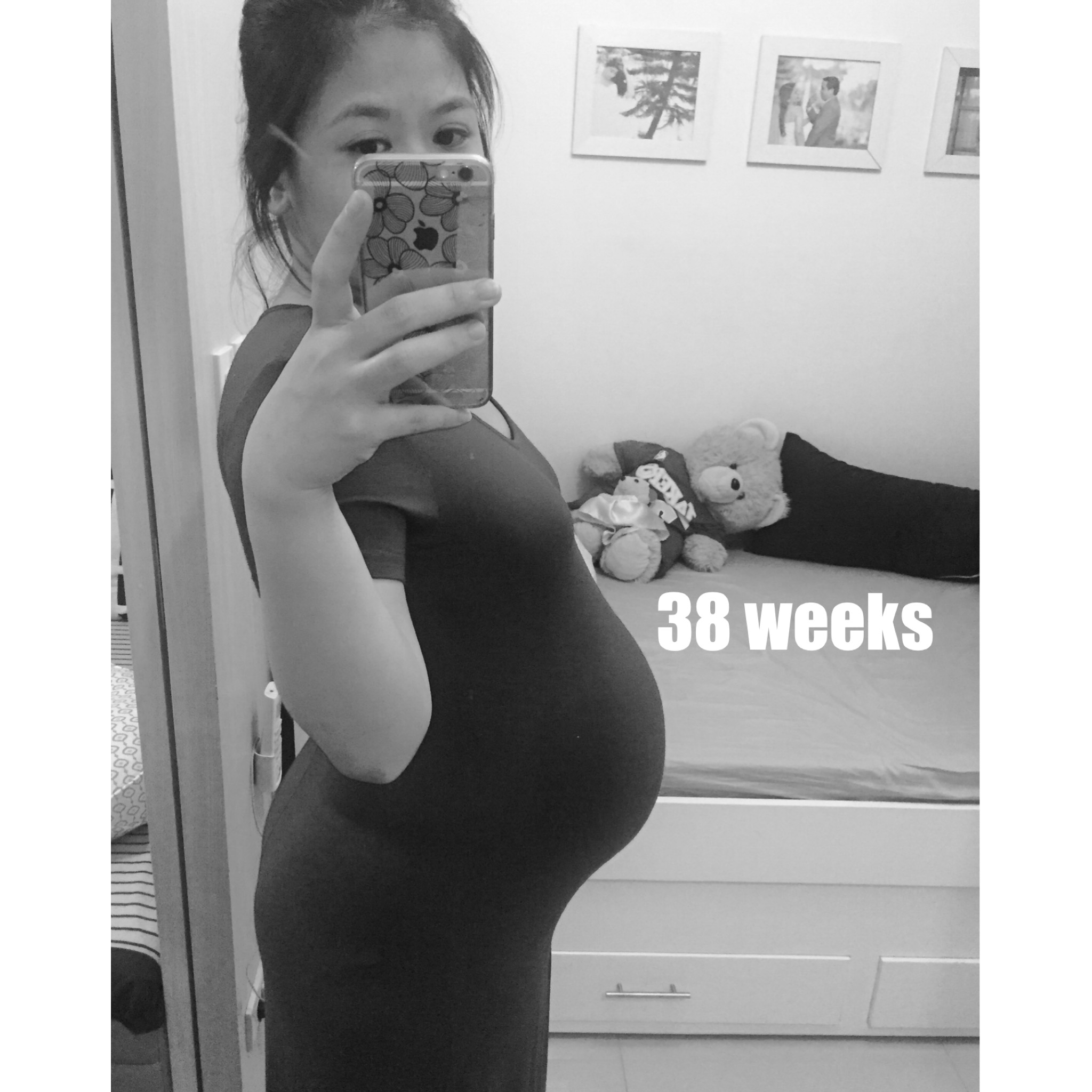 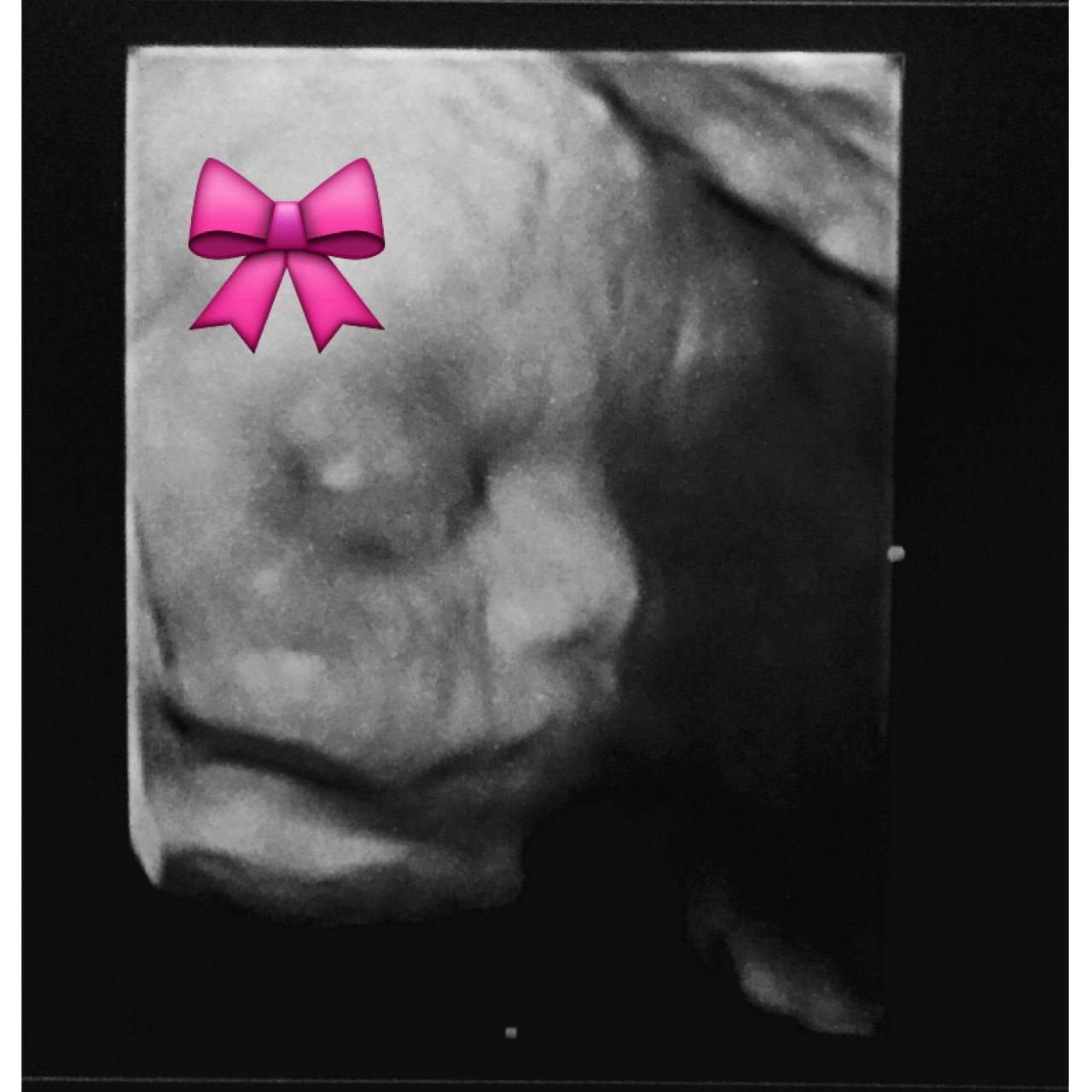 Almost every mommy I knew told me that 2nd trimester’s their favorite part of pregnancy. It’s the time when all the morning sickness will be gone and that I can really enjoy being pregnant. Also, it’s the time when the ‘bump’ will start to show up.
I was really excited for all my nausea and throwing up to stop. I have lost 6-7lbs for the past 3 mos. Partly I was happy because hello, I lost lbs and was assured that baby was fine. But not so much since losing weight equated to being uneasy all the time. Hehe.
Stress at work was really piling up that time. Beej and I decided that I should quit my office job for now and just focus on the baby. I resigned and stayed at home. At first it was not easy to put my career on hold, but if it meant my little bacon will be healthy and strong, then, it’s fine. I commend my husband for being so hardworking and being so supportive. Best Dad and Husband Awardee! <3
Without me really looking, I got a message from a Recruitment Head asking if I am interested to be a Researcher/Sourcer while working at home. Of course I said yes! That’s the plan – for me to get an online job while focusing on my pregnancy.
Monthly check-ups were made. We also changed our Ob-Gyne because Dra. Syki-Young’s rate was really high and we wanted to be practical. I researched and found Dra. Socorro Caedo-Lim – referred by one of my friends too. She was warm, pleasant, and nice. At first I was hesitant as she was very timid and not at all chikadora but her rate was within our target so who are we to complain? Hehe.

At 20 weeks, we went on for another ultrasound: Congenital Anomaly Scan, to check if everything was okay with little bacon and to know what the gender was. As soon as they’re done with the ultrasound, they called Beej to let us know that we were having a GIRL. I was excited but in my heart I kinda knew we were having a girl right from the very start. Instinct I believe.

Two days (Tuesday) after  we found out that it was positive in the pregnancy test, we went to Dra. Syki-Young in Makati Med, she’s the OB referred by one of our friends. Based on my Last Menstrual Period (September 24, 2015), she said I was possibly 4 weeks and 4 days pregnant. But of course we cannot tell this early if it’s 100% accurate so she advised us to have a Transvaginal Ultrasound on the 7th week.
I was disappointed really, because I was expecting it to be the grand ultrasound right away. Hehe. So I went back to the office and faced the stress of a recruitment job.
Thursday came and I felt some pain in my lower back and tummy. I panicked and went to the OB clinic right away! She mentioned it’s just nothing and I was just too paranoid or probably stressed out. She advised me to take a two day rest and not to stress out too much.
Week 7. So anxious for the first ultrasound. And there you go, we saw our little bacon. We heard and saw the heartbeat and we were so happy! However, there was a slight (normal) problem seen in the ultrasound. I was seen with Subchorionic Hemorrhage near the sac; I was told it’s pretty normal but it’s still best that I take a bed rest for two weeks and come back on the 9th week for another ultrasound. I was given meds to make sure the baby will be alright. I immediately told my boss about it and took my 2-week leave.
I stayed in Batangas because I was really having a hard time in the initial stage of pregnancy. I hated anything that’s fried. The smell of “ginisa” was making me puke and was making me angry. I kept vomiting and I was always nauseous.  Plus during those times, I longed for my mother so much. Shecooked me real food, prepared and bought fruits. I felt really loved. This also meant, my husband can already eat breakfast at home without worrying that I’ll throw up. Hehe.
Week 9. We went back for another ultrasound. I remember praying so hard that our baby is okay. And yes, our little bacon’s doing just fine! I was cleared for the internal bleeding but was asked to continue with my “pampakapit” meds plus folic acid.
Back to work. I told myself, actually I was told by everyone, to take it easy at work. It was really hard to function since I was always feeling weak and all.
On the 12th week, my birthday, we finally heard our little bacon’s heartbeat via the Doppler device! Oh it was the perfect gift!!! We were teary eyed! 🙂

Prior to getting married, Beej and I agreed to wait for 6 months to 1 year before having a baby. So after getting married, we enjoyed our time just the two of us. Five months of being together, we talked about trying to conceive and prepared ourselves. We were excited.

I resigned from my graveyard shift job and applied to a regular day-job, did some exercise, and quit smoking. We had ourselves checked to make sure we really are ready. On the first month, I tested and it was negative. I felt a bit sad and thought to myself, “it’s not that easy to get pregnant even if I know my period and cycle so damn well.”

And so we tried again. I remember it clearly, October 4, 2015 – I knew I was fertile then, but I didn’t tell my husband as I know pressure won’t help. Hehe. Night of October 6, we did it again. In my head, I loved it of course, but in my heart I knew, that was it.

October 20, 2016, I was supposed to have my period but it didn’t happen. I thought it was probably because of too much stress in the office. So I waited. October 24, still no period but I was feeling tired and my back really hurt – just like whenever my period is about to come. But that night, I bought Pregnancy Test Kit already, just because I was almost 5 days delayed, something that never happened in the past.

Six in the morning of October 25, I woke up anxious. Not sure if it’s because I felt like peeing or because I was excited to do the PT. Beej was sleeping soundly, I did not want to wake him up. So I went ahead and checked. In just a matter of 10 seconds, 2 lines showed up! That fast. I did not even blink and saw how it formed two lines right after I put my pee on it. I cannot explain how I felt – I was shaking, speechless. Went to husband and gently woke him up. He said, “wow” and hugged me.

At 10am, he bought 2 more PT kits just to double check. And those two came with 2 lines again. So happy! We went ahead and told our mothers. We prepared for the day because we’re scheduled to have lunch at Rej and Oneal’s place. They were the first ones to know about the good news!

After that, we heard mass and sincerely thanked the Lord for this blessing. And since then, there’s never a time that I did not touch and talk to my tummy. I felt love at that very moment. <3